The discovery of the Kimbiji aquifer in Tanzania

More than four decades ago, seismic profiles were acquired in connection with oil exploration along the coast of Tanzania, partly funded by Norwegian development programs. No significant quantities of oil were discovered at that time, and the information was shelved for nearly 40 years.

In 2005, Ruden Geo Solutions decided to take a closer look into these deeper realms which had been investigated 40 years earlier by the oil sector. We struck an abundance of fresh water, far deeper than any water prospecting had gone until then.

The combination of using well data and seismic lines previously acquired by the oil industry, with applied hydrogeology, and innovative drilling techniques resulted in the discovery the Kimbiji aquifer. This data and techniques enabled the decision to drill to 600m depth to target a Neogene aquifer.

The whole aquifer system contains some 5000km3 of water while the rate of recharge from the hinterland is in the order of 2 km3 per year*. The Neogene deposits of the Kimbiji aquifer system form a continuous freshwater aquifer that extends 0-3000m in depth and some 65km eastwards, under the Indian Ocean.

After Ruden AS discovered the aquifer by drilling three exploration wells, CDM Smith in cooperation with Ruden AS drilled 17 more wells and the field was delivered to the local authorities for the water supply of the Greater Dar es Salaam area. 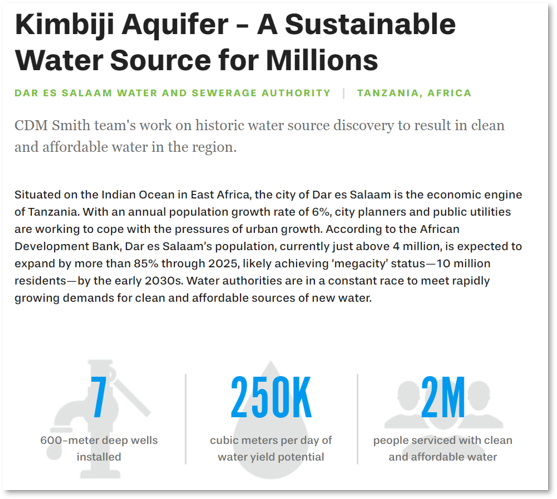